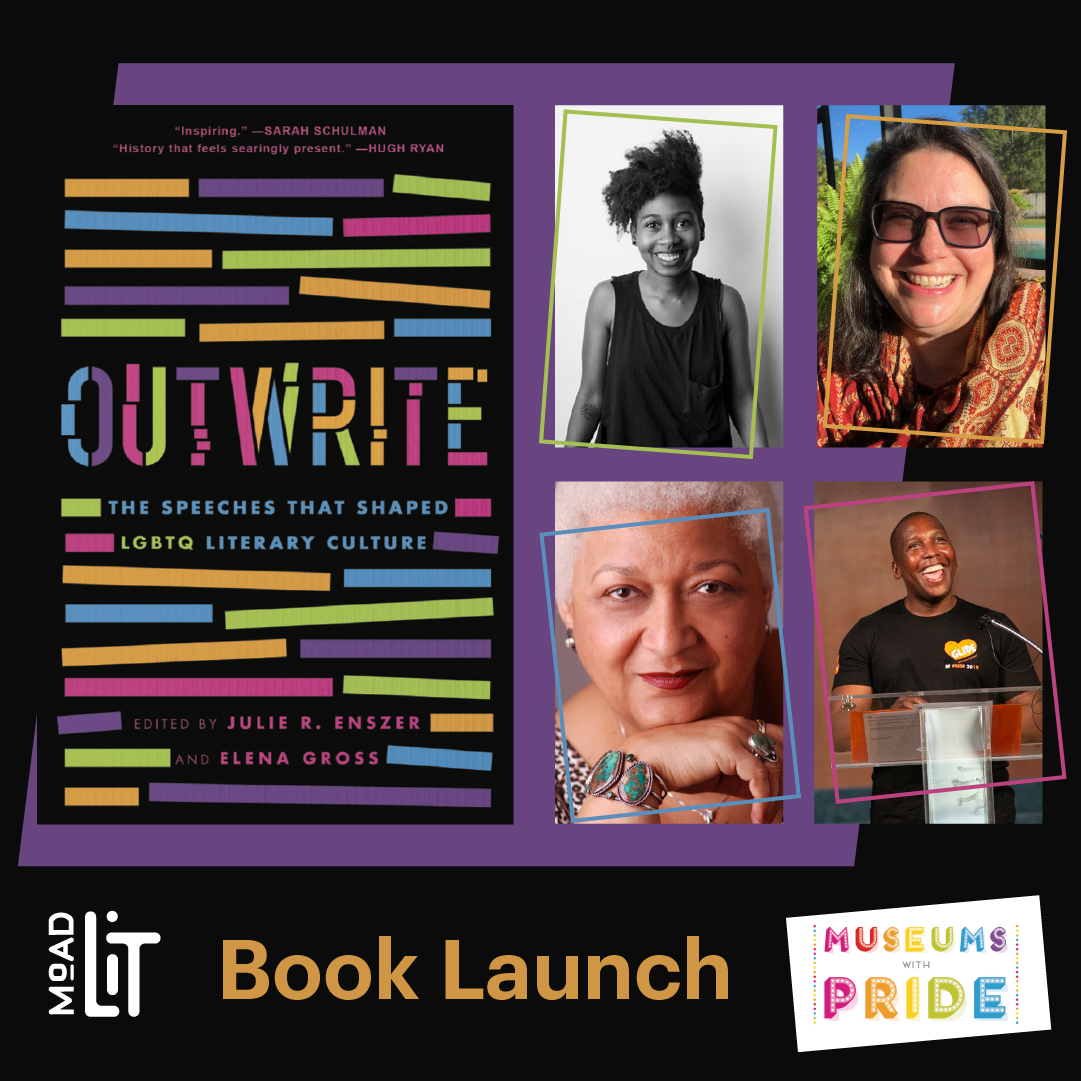 In celebration of Pride Month, join us for a reading and discussion about the book OutWrite: The Speeches That Shaped LGBTQ Literary Culture, edited by Julie Enszer and Elena Gross. Joining the co-editors for readings and discussion will be poets Rev. Marvin K. White and Jewelle Gomez.

Co-Editor: Elena Gross (she/they) is the Director of Exhibitions & Curatorial Affairs at Museum of the African Diaspora in San Francisco and an independent writer and culture critic living in Oakland, CA. She received an MA in Visual & CriticalStudies from the California College of the Arts in 2016, and her BA in Art History and Women, Gender & Sexuality Studies from St. Mary’s College of Maryland in 2012. She specializes in representations of identity in fine art, photography, and popular media. Elena was formerly the creator and co-host of the arts & visual culture podcast what are you looking at? published by Art Practical. Her research has been centered around conceptual and material abstractions of the body in the work of Black modern and contemporary artists. She has presented her writing and research at institutions and conferences across the U.S., including Nook Gallery, Southern Exposure,KADIST, Harvard College, YBCA, California College of the Arts, and the GLBT History Museum. In 2018, she collaborated with the artist Leila Weefur on the publication Between Beauty & Horror (Sming Sming Books). The two performed a live adaptation of their work at The Lab, San Francisco. Her most recent writing can be found in the publication This Is Not A Gun (Sming Sming Books / Candor Arts). Elena is the co-editor, along with Julie R. Enszer, of OutWrite: The Speeches that Shaped LGBTQ Culture (Rutgers University Press, 2022).

Julie R. Enszer, PhD, is a scholar and a poet. In 2022, she has two books forthcoming; Rutgers University Press will publish OutWrite: The Speeches that Shaped LGBTQ Literary Culture in March of 2022 and Sinister Wisdom will publish Fire-Rimmed Eden: Selected Poems by Lynn Lonidierin October of 2022. Her scholarly book manuscript, A Fine Bind, is a history of lesbian-feminist presses from 1969 until 2009. Her scholarly work has appeared or is forthcoming inSouthern Cultures,Journal of Lesbian Studies,American Periodicals,WSQ, andFrontiers.She is the author of four poetry collections,Avowed(Sibling Rivalry Press, 2016),Lilith’s Demons(A MidsummerNight’s Press, 2015),Sisterhood(Sibling Rivalry Press, 2013) andHandmade Love(A Midsummer Night’s Press,2010). She is editor ofThe Complete Works of Pat Parker(Sinister Wisdom/A Midsummer Night’s Press, 2016),which won the 2017 Lambda Literary Award for Lesbian Poetry,Sister Love: The Letters of Audre Lorde and PatParker 1974-1989(Sinister Wisdom/A Midsummer Night’s Press, 2018), andMilk & Honey: A Celebration of JewishLesbian Poetry(A Midsummer Night’s Press, 2011), which was a finalist for the 2012 Lambda Literary Award inLesbian Poetry. Enszer has her MFA and PhD from the University of Maryland. She edits and publishesSinister Wisdom, a multicultural lesbian literary and art journal, and a regular book reviewer for theThe Rumpus andCalyx. You can read more of her workatwww.JulieREnszer.com.

Jewelle Gomez, (Cape Verdean/Wampanoag/Ioway) is a novelist, essayist, poet, educator, and public speaker.She’s the author of eight books including the first Black Lesbian vampire novel, THE GILDA STORIES, which hasbeen in print more than 25 years and was recently optioned by Cheryl Dunye for a TV mini-series. Her work hasappeared numerous anthologies including “Dark Matter: A Century of Speculative Fiction from the AfricanDiaspora,” and “Red Indian Road West.” Her plays about James Baldwin and Alberta Hunter have been produced inSan Francisco and New York City. Follow @VampyreVamp

Marvin K. White, MDiv, is currently serving as the Full-time Minister of Celebration at GLIDEChurch in SanFrancisco. He is a graduate of The Pacific School of Religion, where he earned aMDiv. He is the author of fourcollections of poetry:Our Name BeWitness;Status; and the twoLammy-nominated collectionslast rightsandnothin’ugly fly. He was named one ofYBCA's"100" in 2019. He is articulating a vision of social, prophetic and creativejustice through hiswork as a poet, artist, teacher, collaborator, preacher, cake baker, and Facebook Statustician

Running from 1990 to 1999, the annual OutWrite conference played a pivotal role in shaping LGBTQ literary culture in the United States and its emerging canon. OutWrite provided a space where literary lions who had made their reputations before the gay liberation movement—like Edward Albee, John Rechy, and Samuel R. Delany—could mingle, network, and flirt with a new generation of emerging queer writers like Tony Kushner, Alison Bechdel, and Sarah Schulman.

This collection gives readers a taste of this fabulous moment in LGBTQ literary history with twenty-seven of the most memorable speeches from the OutWrite conference, including both keynote addresses and panel presentations. These talks are drawn from a diverse array of contributors, including Allen Ginsberg, Judy Grahn, Essex Hemphill, Patrick Califia, Dorothy Allison, Allan Gurganus, Chrystos, John Preston, Linda Villarosa, Edmund White, and many more.

OutWrite: The Speeches that Shaped LGBTQ Literary Culture offers readers a front-row seat to the passionate debates, nascent identity politics, and provocative ideas that helped animate queer intellectual and literary culture in the 1990s. Covering everything from racial representation to sexual politics, the still-relevant topics in these talks are sure to strike a chord with today’s readers.