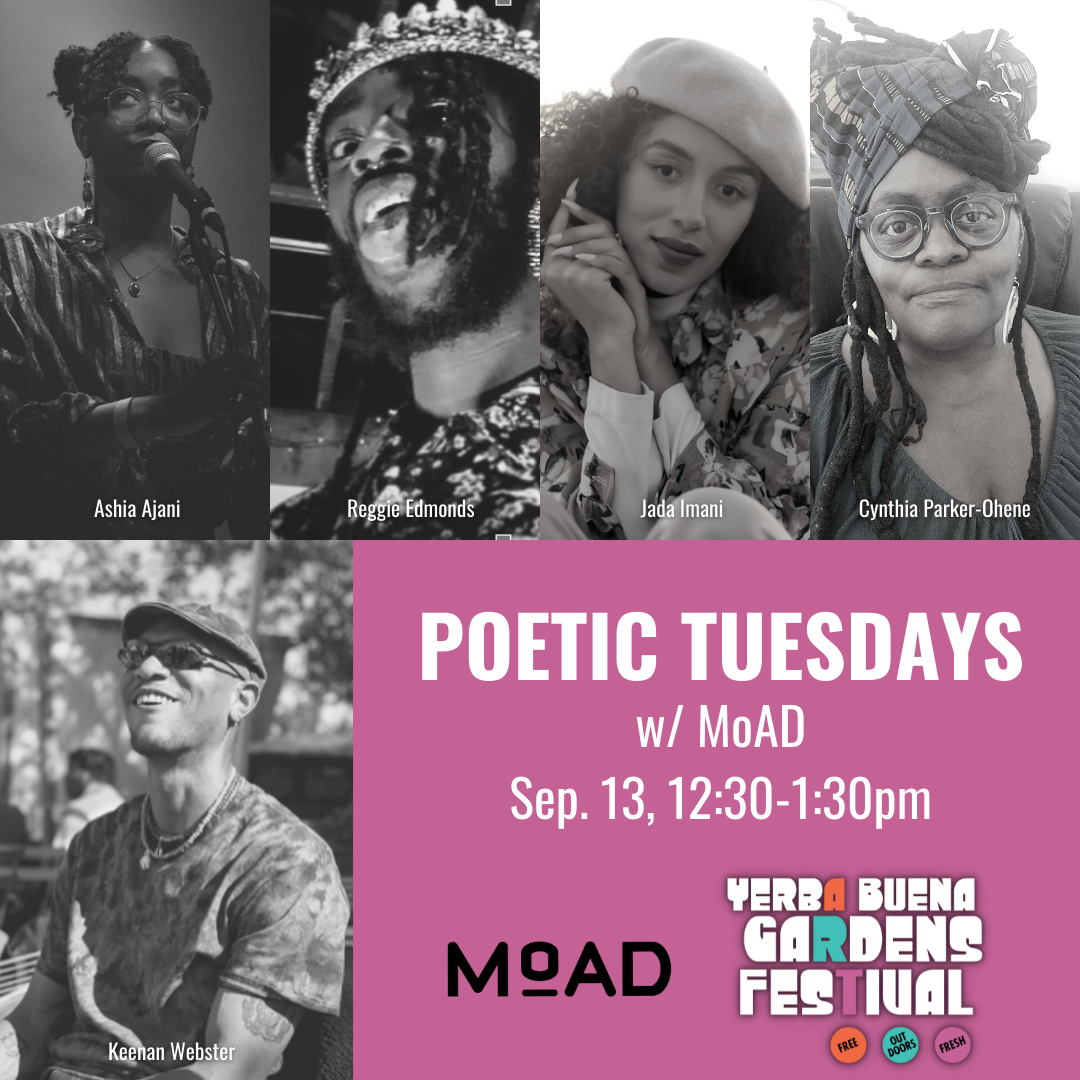 Sharing works that delight, provoke, inspire and rouse, the monthly Poetic Tuesdays series runs from May to October, turning lunchtime into an oasis of creative expression. Lighting up the Gardens with a fabulously curated line-up of poets and musicians, Poetic Tuesdays offer a vivifying midday breather for neighborhood groups, students, office workers on break and even out-of-towners looking for respite from the City’s hustle and bustle.

Ashia A (they/she) is a Black storyteller soulchild hailing from Denver, CO, Queen City of the Plains and the unceded territory of the Cheyenne, Ute, Arapahoe and Comanche Peoples. They are an environmental justice educator with Mycelium Youth Network and co-poetry editor of the Hopper Literary Magazine. Their work explores Black diasporic environmental stewardship, harm & placemaking. Her words have been featured in Sierra Magazine, World Literature Today, Honey Lit, and Atmos Magazine, among others. Their poetry debut, Heirloom, is forthcoming Spring 2023. They can be found grass-side, sharing a cup of coffee with the sun. Follow them @ashiainbloom and ashiaajani.com.

Reggie Edmonds (They/Them) is a poet, educator, and cultural curator based out of Oakland, CA. They are the co-founder of Rich Oak Events which organizes the Oakland Poetry Slam, the Berkeley Poetry Slam, the Rich Oak Alchemy Slam, and the online platform Bay Poets Unite. They have been awarded various fellowships and awards from organizations like Nomadic Press, the Afro Urban Society, Shuffle Collective and others. Their work can be found in Rigorous Magazine, Foglifter Journal, Stentorian Bitch and two self published chapbooks, I’m Too Black For this Shxt (2017) and SadBoi (2019).  ig and twitter: @Reggiepoetry

Jada Imani is an East St. Louis-born, Bay Area-raised Hip-Hop R&B artist and organizer. Jada is known for her dynamic MC presence as a performer, event host and workshop facilitator.

At age 15, Jada began curating live performances at Oakland's First Friday Festival in the Alan Blueford Center for Justice, where she built a community while hosting hundreds of artists over the course of three and a half years.

Imani since has collaborated on projects with Adidas, the Oakland Museum of California, and the GRAMMYs Recording Academy as a voting member and finds her ultimate passion is in grassroot projects.

Jada Imani has a newly launched merchandise line around her latest singles and music videos in partnership with local women-of-color owned businesses including AVOCURL, The Well and most recently Oaklandish.

Cynthia Parker-Ohene is a three-time Pushcart nominee, abolitionist, cultural worker, and therapist. She is an MFA graduate in Creative Writing at Saint Mary’s College of California, and the Chester Aaron Scholar for Excellence in Creative Writing. She is a winner of the San Francisco Foundation/Nomadic Press Poetry Prize. Her recent work has appeared in Poetry Daily, Verse Daily. The Rumpus, Black Warrior Review, Bellevue Literary Review, Kweli, and Green Mountains Review, West Branch among others. She has received fellowships and support from Tin House, Callaloo, Juniper, Hurston-Wright Foundation, Naropa University, and elsewhere, as well as work in the anthologies, Black Nature: Four Centuries of African American Nature, and The Ringing Ear: Black Poets Lean South. She is also a Poetry Reader for The Adroit Journal. Her book Daughters of Harriet is published by The Center for Literary Publishing, Colorado State University.

Keenan Webster was born in Nashville, Tennessee. His love for music deepened in his youth hearing blues, spirituals, gospels, and folk music of the south. Some of his elders are keepers of the spirituals and slave hymns that had been passed down from generations. Upon arriving in Los Angeles, CA, in his teenage years he was fascinated with African, Afro Cuban, reggae, and other music from the African Diaspora. Keenan has been on a mission to use music for world peace and healing and to fight against racism. Keenan plays Kora, Kamele Ngoni, Balaphone.

Nia McAllister is a Bay Area born poet, writer and environmental justice advocate. Since joining the Museum of the African Diaspora in 2017, she has dedicated herself to facilitating impactful change at the intersection of art, activism, and public engagement. As the Public Programs Manager at MoAD, Nia leads the MoAD Lit program and is the host and founder of MoAD’s Open Mic series. At MoAD and beyond, Nia creates platforms for amplifying the work of Black artists on a global scale. Nia’s writing and poetry have been featured on Poets of Color Podcast and published in Radicle magazine, Meridians journal, and Painting the Streets: Oakland Uprising in the Time of Rebellion (Nomadic Press, 2022). Nia received her B.A. in Environmental Analysis: Race, Class, Gender, and the Environment from Pomona College.