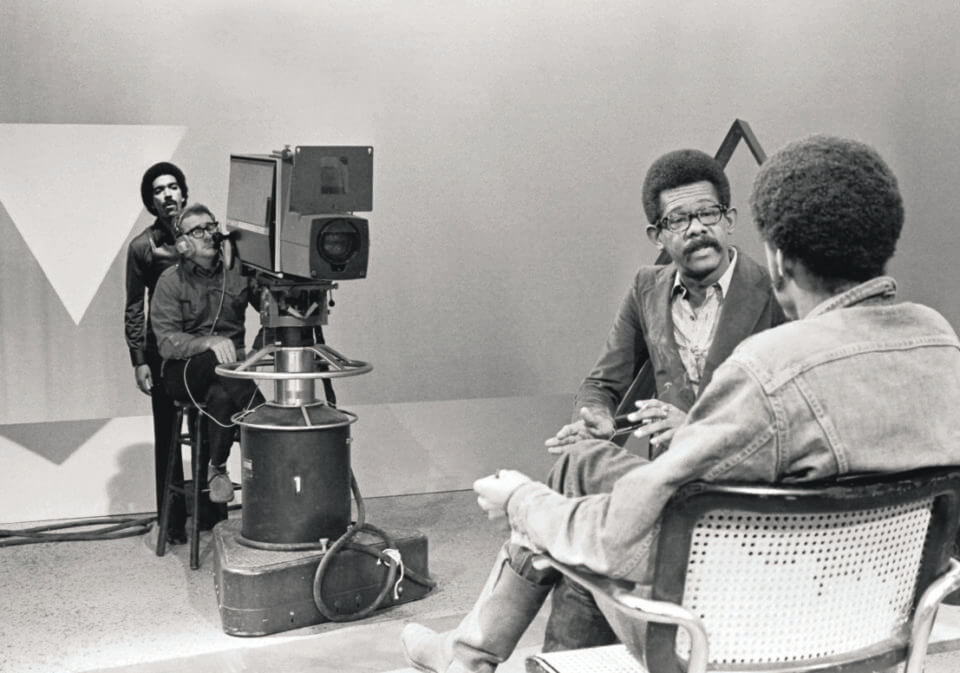 Join us for the film club conversation today at 5pm (PST):

IMAGE CREDIT: SOUL! director Stan Latham stands with cameraman on set for the interview between Host/Producer of the TV show SOUL! Ellis Haizlip with filmmaker Melvin Van Peebles (Sweet Sweetback’s Baaddass Song) in a scene from the film Mr. SOUL! DIRECTED BY MELISSA HAIZLIP.  Photo by Chester Higgins; Courtesy of Shoes in the Bed Productions

Museum of the African Diaspora and Black Public Media present

Join us for our monthly series, The African Diaspora Film Club. Modeled after our African Book Club, we will meet once a month to discuss a film that we have all viewed in advance of the discussion. The conversation will be moderated by Cornelius Moore, co-director of California Newsreel and film series curator at MoAD. We will be choosing a selection of films, some previously screened at MoAD.

You may have already seen it, or this may be your first introduction. In either case, join us on the second Sunday of the month for a lively discussion of the film.

This month’s selection is MR. SOUL! (Melissa Haizlip, 2018, 115 minutes). You will receive instructions to join via zoom after you sign up here. Look for an email from MoAD after you sign up, if you don’t receive it in your inbox, look in your spam or junk mail.

We will not be screening the film. Please view the film on your own in advance of the discussion. MR. SOUL! will be available for you to screen on your own December 27, 2020-January 10, 2021 on EVENTIVE. The film will also premiere on PBS on February 22, 2021.

Producer and Director Melissa Haizlip will join us for the discussion.

MR. SOUL!, the documentary feature film directed and produced by Melissa Haizlip, celebrates the groundbreaking PBS series from its genesis to its eventual loss of funding against the backdrop of a swiftly changing political and social landscape, while profiling Ellis Haizlip, the charismatic man behind one of the most culturally significant and successful television shows in U.S. history.

From 1968 to 1973, the public-television variety show SOUL!, guided by the enigmatic producer and host Ellis Haizlip, offered an unfiltered, uncompromising celebration of black literature, poetry, music, and politics—voices that had few other options for national exposure, and, as a result, found the program an improbable place to call home. The series was among the first to provide expanded images of African-Americans on television, shifting the gaze from inner-city poverty and violence to the vibrancy of the Black Arts Movement. With participants’ recollections and a bevy of great archival clips, MR. SOUL! captures a critical moment in culture whose impact continues to resonate.

MELISSA HAIZLIP - Producer | Director | Producer Melissa Haizlip is an award-winning filmmaker based in New York. Her work responds to pressing social issues at the intersection of racial justice, social justice, activism, and representation. Female transformation and empowerment are at the core of all of her ideas, with the goal being to advocate and amplify the voices of women and people of color.

Melissa’s feature documentary, Mr. SOUL!, has been awarded a finalist for the 2019 inaugural Library of Congress Lavine / Ken Burns Prize for Film, a new, annual prize that recognizes a filmmaker whose documentary uses original research and compelling narrative to tell stories that touch on some aspect of American history. The film won Best Music Documentary at the 2018 International Documentary Association Awards. Mr. SOUL! premiered at Tribeca and screened at 50 festivals, receiving 16 Jury and Audience Awards for Best Documentary, and the 2019 FOCAL Award for Best Use of Archival Footage in an Entertainment Production.

Melissa directed and produced CONTACT HIGH: A VISUAL HISTORY OF HIP-HOP and produced YOU’RE DEAD TO ME (2013) directed by Wu Tsang, about a grieving Chicana mother coming to terms with the loss of her transgender child on Día de los Muertos. The film won Best Short at the 2014 Imagen Awards, and screened at over 50 festivals and museums. Melissa’s two-channel art films have been exhibited by the Hammer Museum Los Angeles Biennial, Contemporary Arts Museum Houston, and Stedelijk Museum in Amsterdam. Melissa has been awarded grants from the Ford Foundation JustFilms, National Endowment for the Humanities, International Documentary Association, National Endowment for the Arts, Black Public Media, Firelight Media, ITVS, Awesome Without Borders, and Puffin Foundation. Melissa went to Yale University.

She’s currently producing a docuseries on women in hip-hop. ‍

‍Black Public Media (BPM), formerly known as National Black Programming Consortium develops, produces, funds, and distributes media content about the African American and global Black experience. Our mission is to commit to a fully realized expression of democracy and we accomplish this by supporting diverse voices through training, education, and investment in visionary content makers.