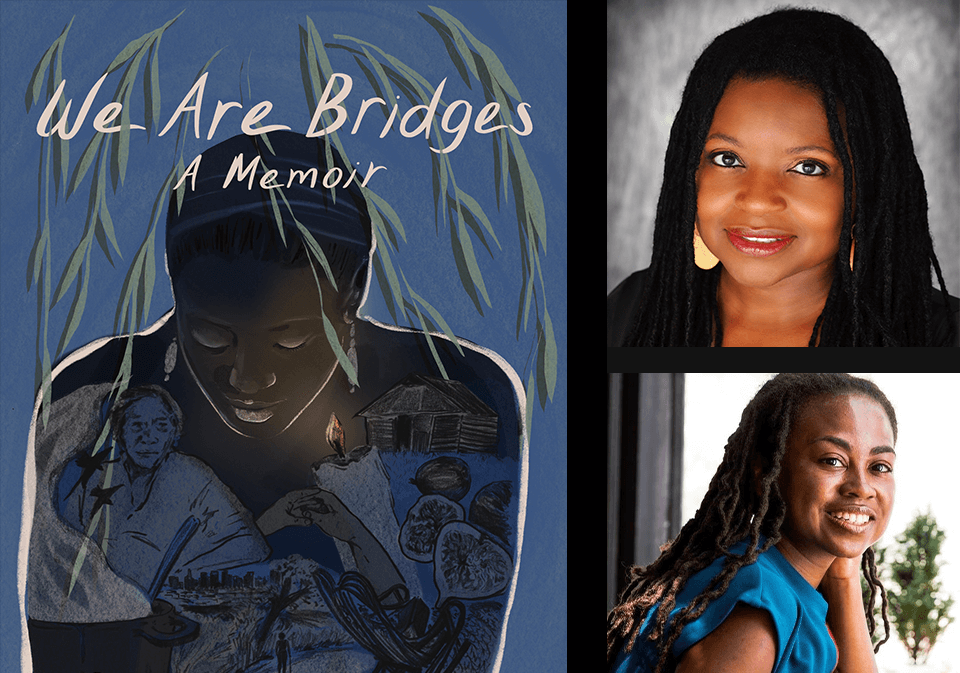 Join us on Zoom for today's program:

Join us in celebrating the launch of We Are Bridges: A Memoir with Award-Winning author Cassandra Lane in conversation with writer and editor Jamia Wilson.

When Cassandra Lane finds herself pregnant at thirty-five, the knowledge sends her on a poignant exploration of memory to prepare for her entry into motherhood. She moves between the twentieth-century rural South and present-day Los Angeles, reimagining the intimate life of her great-grandparents Mary Magdelene Magee and Burt Bridges, and Burt's lynching at the hands of vengeful white men in his southern town.

‍We Are Bridges turns to creative nonfiction to reclaim a family history from violent erasure so that a mother can gift her child with an ancestral blueprint for their future. Haunting and poetic, this debut traces the strange fruit borne from the roots of personal loss in one Black family—and considers how to take back one’s American story.

‍We Are Bridges is available for purchase at the MoAD Bookstore.

Cassandra Lane is a writer and editor based in Los Angeles. Lane received her MFA from Antioch University LA. Her stories have appeared in the New York Times's Conception series, the Times-Picayune, the Atlanta Journal Constitution, and elsewhere. She is editor in chief of L.A. Parent magazine and formerly served on the board of the AROHO Foundation.

Jamia Wilson is a feminist activist, writer, and speaker. She joined Random House as vice president and executive editor in 2021. As the former director of the Feminist Press at the City University of New York and the former VP of programs at the Women’s Media Center, Jamia has been a leading voice on women’s rights issues for over a decade.

Her work has appeared in numerous outlets, including the New York Times, the Today Show, CNN, Elle, BBC, Rookie, Refinery 29, Glamour, Teen Vogue, and The Washington Post. She is the author of Young, Gifted, and Black, the introduction and oral history in Together We Rise: Behind the Scenes at the Protest Heard Around the World, Step Into Your Power: 23 Lessons on How to Live Your Best Life, Big Ideas for Young Thinkers, ABC's of AOC, and the co-author of Roadmap for Revolutionaries: Resistance, Advocacy, and Activism for All.