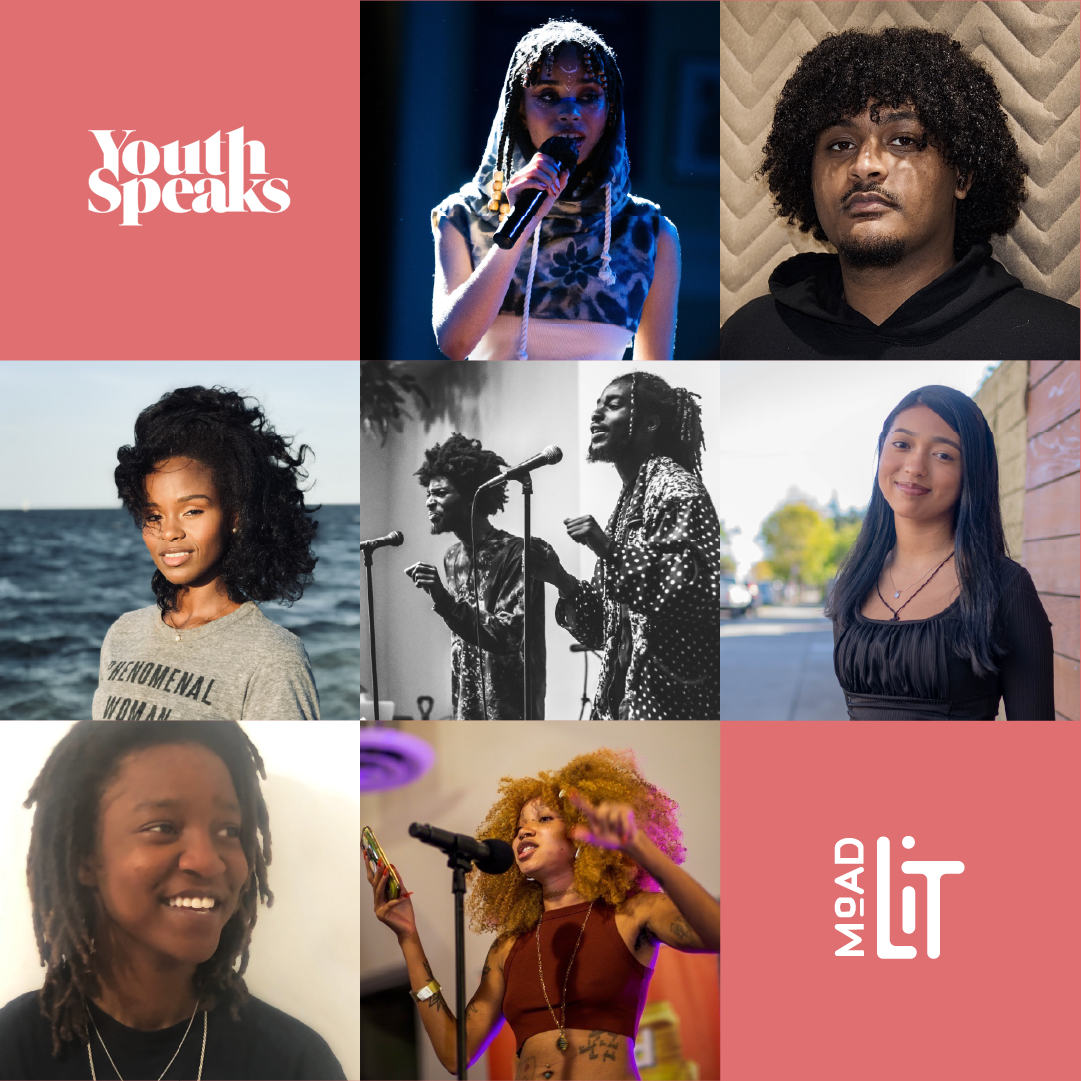 Museum of the African Diaspora (MoAD) and Youth Speaks are teaming up to highlight some of the Bay Area’s most talented youth poets! This year’s Community Voices: Poets Speak series is all about youth voices.

This five-week series joins poets and the visual arts for a captivating experience! Eight Bay Area youth poets will share new poems created in response to MoAD’s current exhibition, The New Black Vanguard: Photography between Art and Fashion. Join us in the MoAD galleries to experience creativity at the intersection of visual art and poetry.

Join us for the closing reception and group reading with all featured poets!

Reggie Edmonds (They/Them) is a poet, educator, and cultural curator based out of Oakland, CA. They are the co-founder of Rich Oak Events which organizes the Oakland Poetry Slam, the Berkeley Poetry Slam, the Rich Oak Alchemy Slam, and the online platform Bay Poets Unite. They have been awarded various fellowships and awards from organizations like Nomadic Press, the Afro Urban Society, Shuffle Collective and others. Their work can be found in Rigorous Magazine, Foglifter Journal, Stentorian Bitch and two self published chapbooks, I’m Too Black For this Shxt (2017) and SadBoi (2019). ig and twitter: @Reggiepoetry

Collin Edmonds, also known as “The Artist Formerly Known as Cornrow Collin, is an activist, singer, and poet hailing from Richmond,Ca. He is one fourth of the Rich Oak Alchemy Slam and Oakland Poetry Slam organizing crew. In his spare time he enjoys writing poetry (duh), critiquing societal norms, listening to loud hip hop music in affluent white neighborhoods, and shattering expectations of black men in America.

Myra Estrada, 2021 Oakland Youth Poet Laureate. Myra is an African American and Mexican female poet. Myra considers herself an activist and utilizes her political poetry as a way to expand her knowledge and express her beliefs.

Sahara Frett is an ambitious, creative, and results-focused artist and entrepreneur with a dynamic background that spans multiple states and countries including those in Africa and Asia.  Sahara is a multi-talented woman of color hailing from the Caribbean diaspora.  While trained in the theater, spoken, and instrumental arts, she is also skilled in programming, library sciences, video production, and graphic design.  She has spent almost two decades in performance arts, mastering stage, television and film.

Zouhair Mussa is a Sudanese/Nubian-American community organizer and multi-disciplinary artist from West Oakland. His art is based on the life he has lived and aims at addressing that which is detrimental to him and his community. He seeks to shed light on injustices that plague the places he calls home. He uses his art to remember the fallen and dreams of healing the struggle. Most importantly, he wants to uplift and inspire change with the aid of his artistic expression.

Aleja Cobarruviaz (she/her) is a multidisciplinary poet, singer/songwriter, lyricist, and dancer. As a writer, she draws upon her own experience as a jumping off point for honest discourse on realities of the Black experience. In her own personal life, Aleja is a follower of Christ whose family has a long line of those who see visions and receive words and messages through dreams. Professionally, she is a visionary and business woman who produces vibrant life behind her own unique sound. Her music inspirations include Alicia Keys, Erykah Badu, Lauryn Hill, Anthony Hamilton, Musiq Soulchild, Mos Def, Talib Kweli, Kendrick Lamar, J. Cole, Doja Cat, JID, and Outkast. Her work is about community-driven change and carving out unique spaces for uncomfortable truths to be heard and explored.

Christell Victoria Roach is an Emmy-nominated poet and performer from Miami, Florida. She is currently a 2022-2024 Wallace Stegner Fellow at Stanford University for poetry. She earned her MFA in Creative Writing at the University of Miami after graduating from Emory University with a Bachelor of Arts Degree in Creative Writing & African American Studies. She writes the Blues of the Southern Tropics. Her recent work has been published by the Academy of American Poets,  POETRY Magazine,  Obsidian Literary Journal , Scalawag Magazine, The Miami Rail, and SWIMM Magazine. She is currently working on her first book of poetry entitled, “Bluesing.

Niambi Walker is a black, queer writer from Atlanta, Georgia. They identify as a person who “sometimes can put words together well enough to win slams, write books and just generally talk their shit”. They double as the menace dancing by themselves at the club yelling “Get into iiiit” and the author of “Accidentally Ordered an Espresso”.