Programs & Events
>
Conversations Across the Diaspora with Tatyana Ali 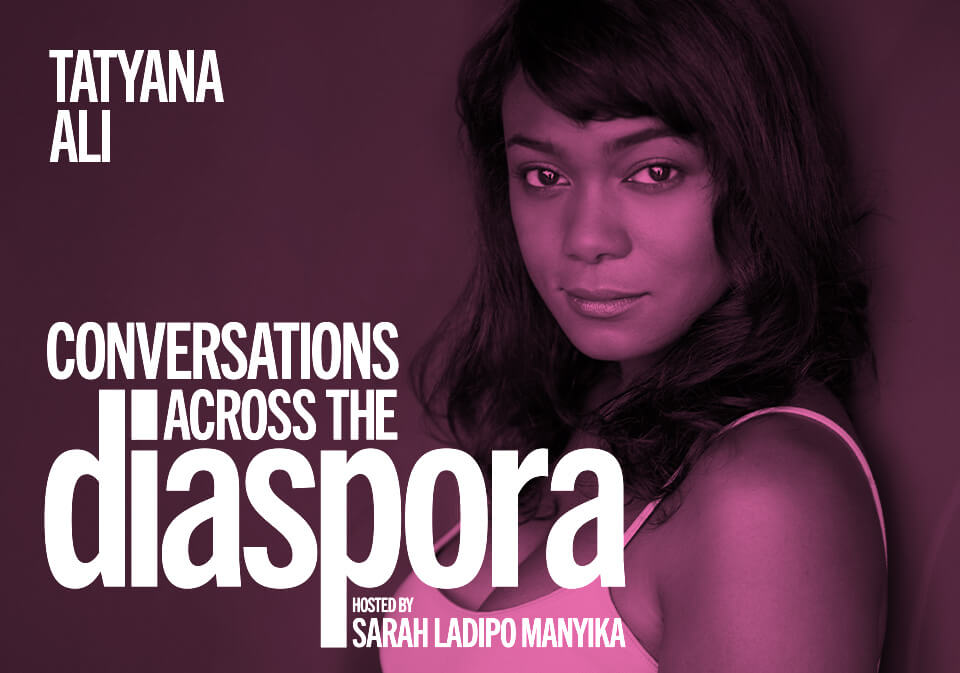 Please join us for today's program:

‍Conversations across the Diaspora, hosted by Sarah Ladipo Manyika

‍A new interactive series brings you eclectic conversations from across the African diaspora. Join author and host Sarah Ladipo Manyika for talks with some of the most exciting voices from Berlin to Harare, from Tamale to London and New York and everywhere in between. We’ll introduce you to all sorts of folks—some you will know, others you may never have heard of, but never the usual suspects talking about the usual topics.

‍After you register you will receive information to join via zoom on August 28th at 12 noon (Pacific Daylight Time), 8pm (UK).

‍Tatyana Ali is best known to millions, worldwide, for playing "Ashley Banks" in the iconic comedy series "The Fresh Prince of Bel-Air”. Born in Brooklyn, NY, she is a Broadway-trained actress, singer, producer, activist and Harvard University graduate.

Ali has appeared in numerous television, film and theatrical projects over her career, which began at four years old including Sesame Street, the Pulitzer Prize winning Broadway production of Fences, The Young and the Restless and Disney’s Glory Road. The 5-time NAACP Image Award winner, Harvard Aspiring Minority Business Leader and Black Girls Rock! honoree, was named one of most beautiful women in the world by People Magazine en Español and People Magazine.

She holds a gold record for her 1998 debut album Kiss the Sky, which included the hit singles "Daydreamin'" and "Boy You Knock Me Out” and joined both the *NSYNC and The Backstreet Boys world tours. In 1999, her recording of "Precious Wings" for The Adventures of Elmo in Grouchland soundtrack won a Grammy Award for "Best Musical Album for Children." In 2013, Ali digitally released the independent EP “Hello”.

She co-founded HazraH Entertainment, a production company dedicated to creating quality content for underserved communities. The company was a production partner on the Martin Lawrence executive-produced sitcom "Love That Girl!", the first original scripted program on the TV One Network. HazraH Entertainment also produced the acclaimed web series "Buppies" for BET.com.

Ali has spent the majority of her career engaging in humanitarian efforts. During the 2008 and 2012 presidential campaigns, she served as a surrogate for President Obama, speaking to communities and young people across the country about voting as an imperative. She did the same grass roots work for Hillary Clinton’s campaign in 2016. She has hosted the United Negro College Fund's "Empower Me" Tour 3 years in a row, has been a spokesperson for the Millennium Momentum Foundation for 8 years and is actively involved in Black Girl’s Rock!, an organization dedicated to educating and mentoring young women.

After publishing her first op-ed in Essence magazine in 2019 entitled "Birthright", Tatyana was asked to serve as a Celebrity Council Advocate for the March of Dimes.

She resides in California with her husband and two sons.

‍Sarah Ladipo Manyika was raised in Nigeria and has lived in Kenya, France, Zimbabwe, and England. Sarah is a novelist, short story writer, and essayist and founding books editor for Ozy.com. Her debut novel, In Dependence, is an international bestseller while her second novel, Like a Mule Bringing Ice Cream to the Sun, has been translated into a number of languages.

Her nonfiction includes personal essays and intimate profiles of people she meets from Mrs. Harris and Pastor Evan Mawarire to Toni Morrison and Michelle Obama. Sarah previously served on MoAD’s board and currently serves as Board Director for the women’s writing residency, Hedgebrook.

DONATIONS OF ANY AMOUNT ARE ALWAYS WELCOME, SO IF YOU ARE ABLE TO, PLEASE CONSIDER DONATING TO MOAD ONLINE HERE, OR DONATING THROUGH GIVE BY CELL BY TEXTING THE WORD: MOADSF TO THE NUMBER: 56512 ON YOUR CELL PHONE, THEN FOLLOW THE LINK PROVIDED TO MAKE A DONATION. ALL DONATIONS WILL GO TOWARDS SUPPORTING MOAD AND CONTINUING TO BRING YOU ENGAGING PROGRAMMING.