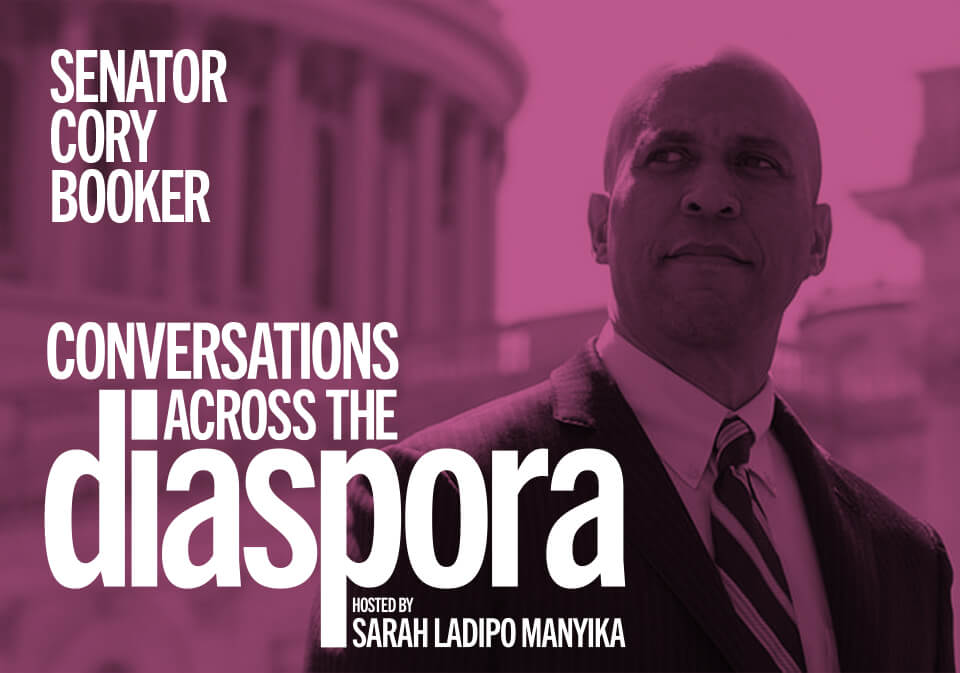 Conversations Across the Diaspora, hosted by Sarah Ladipo Manyika

A new interactive series brings you eclectic conversations from across the African diaspora. Join author and host Sarah Ladipo Manyika for talks with some of the most exciting voices from Berlin to Harare, from Tamale to London and New York and everywhere in between. We’ll introduce you to all sorts of folks—some you will know, others you may never have heard of, but never the usual suspects talking about the usual topics.

This month author and host Sarah Ladipo Manyika in conversation with U.S. Senator for New Jersey Cory Booker. After you register you will receive information to join via zoom on December 11th at 12 noon (Pacific Standard Time) / 8pm (UK). If you don't see an email from MoAD in your inbox, please check your spam or junk mailbox.

Cory Booker believes that the American dream isn’t real for anyone unless it’s within reach of everyone. Booker has dedicated his life to fighting for those who have been left out, left behind, or left without a voice.

Booker grew up in northern New Jersey and received his undergraduate degree from Stanford University. At Stanford, Booker played varsity football, volunteered for the campus peer counseling center, and wrote for the student newspaper. He was awarded a Rhodes Scholarship and went on to study at the University of Oxford, and then Yale Law School, where he graduated in 1997.

Instead of working for a corporate law firm, Booker moved to Newark after law school and started a nonprofit organization to provide legal services for low-income families, helping tenants take on slumlords. In 1998, Booker moved into the Brick Towers housing project in Newark, where he lived until its demolition in 2006. Booker still lives in Newark’s Central Ward today, where the median household income is less than $15,000.

At 29, Booker was elected to the Newark City Council, where he challenged the city’s entrenched political machine and fought to improve living conditions for city residents, increase public safety, and reduce crime.

Starting in 2006, Booker served as Newark’s mayor for more than seven years. During his tenure, the city entered its largest period of economic growth since the 1960s. In addition, overall crime declined and the quality of life for residents improved due to initiatives such as more affordable housing, new green spaces and parks, increased educational opportunities, and more efficient city services.

In October 2013, Booker won a special election to represent New Jersey in the United​ ​States Senate. In November 2014, Senator Booker was re-elected to a full six-year term, and again in November 2020.

As New Jersey’s junior Senator, Cory Booker has brought an innovative and consensus-building approach to tackling some of the most difficult problems facing New Jersey and our country. He has emerged as a national leader in the effort to fix our broken criminal justice system and end mass incarceration, helping craft the most sweeping set of criminal justice reforms in a generation, the First Step Act, which became law in December 2018.

Booker sits on the Judiciary Committee, the Foreign Relations Committee, and the Environment and Public Works Committee.

Sarah Ladipo Manyika was raised in Nigeria and has lived in Kenya, France, Zimbabwe, and England. Sarah is a novelist, short story writer, and essayist and founding books editor for Ozy.com. Her debut novel, In Dependence, is an international bestseller while her second novel, Like a Mule Bringing Ice Cream to the Sun, has been translated into a number of languages. Her nonfiction includes personal essays and intimate profiles of people she meets from Mrs. Harris and Pastor Evan Mawarire to Toni Morrison, Margaret Busby and Michelle Obama.

Sarah previously served on MoAD’s board and currently serves as Board Director for the women’s writing residency, Hedgebrook.