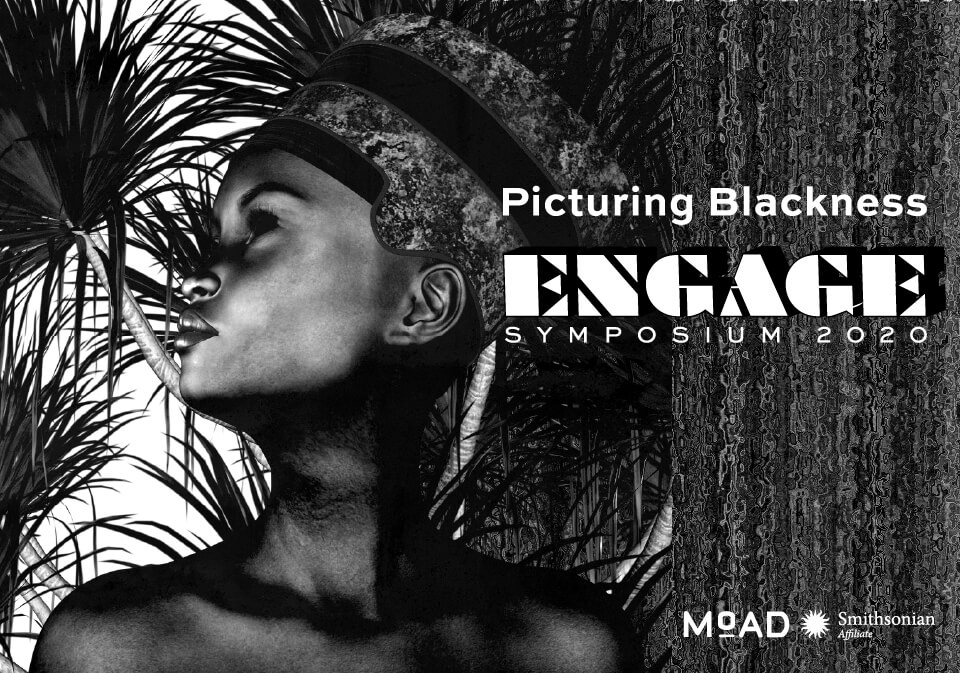 This day-long symposium is inspired by our last 6 months of photographic exhibitions and Black is Beautiful: The Photography of Kwame Brathwaite currently on view in at MoAD. Featuring scholars, artists, curators, and art writers who will join us for insightful conversations centered on the ways in which our contemporary understandings of Blackness has been informed by photographers since the dawn of photography in the 1890s through the present. We will explore how Blackness has been represented or misrepresented in the media, hip hop culture, archives, and in art museums and galleries.

The day begins with a keynote address by Dr. Deborah Willis, followed by inspiring panel discussions, live music and dance performances, and a catered lunch.

MoAD will fully livestream the event on our YouTube channel.

Deborah Willis, PhD is chair of the Department of Photography & Imaging at NYU Tisch School of the Arts; has an affiliated appointment at the College of Arts and Sciences, Department of Social & Cultural Analysis, Africana Studies where she teaches courses on photography and imaging, iconicity, and cultural histories visualizing the black body, women, and gender; and is the director of the NYU Institute of African American Affairs and Center for Black Visual Culture.

She is a MacArthur and Guggenheim fellow; the author and curator of numerous books and exhibitions, including Posing Beauty: African American Images from the 1890s to the Present and its accompanying exhibition; and co-organizer of the “Black Portraiture[s]” conferences.

Dario Calmese is an artist, writer, director and brand consultant currently based in New York City. He received his master’s in photography from the School of Visual Arts and his bachelor’s degree in psychology at Rockhurst University in Kansas City. His artistic works have been shown both nationally and internationally (Aperture Gallery (NYC), Jack Shainman (NYC), National Museum of Turkmenistan).

Dario serves on the advisory board of The Museum @ F.I.T., and is a former Ideas City Fellow at the New Museum in New York City. He is a contributing writer for The Huffington Post, The Daily Beast, and The Business of Fashion and is currently a NYC Urban Design Forum Fellow.

Most recently Dario curated Fashioning the Black Body (2019) and his show direction for the fashion brand Pyer Moss was hailed in the New York Times as the “best show of Fashion Month.”

Elena Gross is the Exhibitions Associate at MoAD and an independent writer and culture critic living in Oakland, CA. She received an MA in Visual & Critical Studies from the California College of the Arts in 2016, and her BA in Art History and Women, Gender & Sexuality Studies from St. Mary’s College of Maryland in 2012.

She specializes in representations of identity in fine art, photography, and popular media.

Elena was formerly the creator and co-host of the arts & visual culture podcast what are you looking at? published by Art Practical. Her most recent research has been centered around conceptual and material abstractions of the body in the work of Black modern and contemporary artists.

She has presented her writing and research at institutions and conferences across the U.S., including Nook Gallery, Southern Exposure, KADIST, Harvard College, YBCA, California College of the Arts, and the GLBT History Museum.

Her works are published in anthologies such as: Africa Under the Prism: Contemporary African Photography from the Lagos Photo Festival by Joseph Gergel, ReSignifications: European Blackamoors, Africana Readings, Edited by Awam Ampka, and Reflections in Black: A History of Black Photographers 1840-Present by Dr. Deborah Willis.

Jacqueline Francis, PhD is the author of Making Race: Modernism and “Racial Art” in America (2012) and co-editor of Romare Bearden: American Modernist (2011). With Mary Ann Calo, Francis is working on a new book about African-American artists’ participation in federally funded art programs of the 1930s and their impact on the emergent, US art market of the 1940s.

Recently, she has published articles on contemporary artists Olivia Mole, Joan Jonas, Andrea Fraser, and (with Tina Takemoto) David Hammons, and on the hot topic of Fair Use. Forthcoming are essays on Romare Bearden (The Museum of Modern Art), Mickalane Thomas (Seattle Art Museum), and Kerry James Marshall (Kunst und Politik, Jahrbuck der Guernica-Gesellschaft). With Kathy Zarur, Francis co-curated the art exhibition Where Is Here for the Museum of the African Diaspora (October 2016-May 2017).

Chris Johnson is the author of The Practical Zone System: for Film and Digital Photography, currently in its sixth edition. He has been president of SF Camerawork, director of the Mother Jones International Fund for Documentary Photography, and chair of City of Oakland's Cultural Affairs Commission.

In 2007 Chris Johnson originated and designed the Oakland International Airport's Southwest Airlines Media Wall installed in the baggage claim area. Together with Hank Willis Thomas he recently received a grant from the Rockefeller Foundation for a work-in-progress titled, Question Bridge: Black Males.

Chris' artwork is in the collection of the San Francisco Museum of Modern Art, Smithsonian Institution, the Oakland Museum of Califoria, the Center for Creative Photography, and the Polaroid International Collection.

Sarah Lewis, PhD is an assistant professor at Harvard University in the Department of History of Art and Architecture and the Department of African and African American Studies. Lewis was the guest editor of the “Vision & Justice” issue of Aperture (2016), which received the 2017 Infinity Award for Critical Writing and Research from the International Center of Photography. Her articles on race, contemporary art, and culture have been published in many academic journals as well as in Art in America, Artforum, the New York Times, and the New Yorker.

Lewis is also the author of The Rise: Creativity, the Gift of Failure, and the Search for Mastery (2014). Her current book, How Race Changed Sight in America, is under contract with Harvard University Press. Lewis received her bachelor’s degree from Harvard, an MPhil from the University of Oxford, and her PhD in the history of art from Yale University.

Before joining the faculty at Harvard, she held curatorial positions at the Museum of Modern Art, in New York, and Tate Modern, in London. She lives in New York City and Cambridge, Massachusetts.

Tyler Mitchell is a photographer and filmmaker based in Brooklyn, working across many genres to explore and document a new aesthetic of blackness. Mitchell is regularly published in avant-garde magazines and commissioned by prominent fashion houses.

In 2018 he made history as the first black photographer to shoot a cover of American Vogue for Beyoncé’s appearance in the September issue. In 2019 a portrait from this series was acquired by The Smithsonian National Portrait Gallery for its permanent collection. This, alongside many other accomplishments, has established Mitchell as one of the most closely watched up-and-coming talents in photography today.

His first solo presentation I Can Make You Feel Good at Foam Fotografiemuseum, Amsterdam (2019) premiered video works including Idyllic Space.

Leigh Raiford, PhD is an Associate Professor and H. Michael and Jeanne Williams Chair of African American studies at the University of California, Berkeley, where she teaches and researches race, gender, justice, and visuality. Raiford is the author of Imprisoned in a Luminous Glare: Photography and the African American Freedom Struggle and the coeditor of, with Heike Raphael-Hernandez, Migrating the Black Body: Visual Culture and the African Diaspora and of, with Renee Romano, The Civil Rights Movement in American Memory.

Raiford’s essays have also been included in the collections Only Skin Deep: Changing Visions of the American Self, (Harry N. Abrams Press, 2003), a history of race and photography in the United States edited by Coco Fusco and Brian Wallis; and Pictures and Progress: Early Photography and the Making of African American Identity, (Duke, 2012), edited by Maurice O. Wallace and Shawn Michelle Smith.

Organizer, Demetri Broxton is an artist, arts educator and independent curator. He is Senior Director of Education at the Museum of the African Diaspora (MoAD) in San Francisco and a contract curator for the City of Berkeley. He has curated and co-curated projects and exhibitions for MoAD, Sargent Johnson Gallery in San Francisco, and the City of Berkeley’s Addison Street Windows and Cube Space.

As an artist, Broxton investigates cultural continuities from Africa to America. He is represented by Patricia Sweetow Gallery in San Francisco.

Born and raised in Oakland, he holds a BFA with an emphasis in painting from the University of California, Berkeley, and an MA in Museum Studies from San Francisco State University.

Keenan Webster will open the day with selections of both traditional West African and original scores on the kora. Keenan has been studying music of the African Diaspora for over twenty years. Born in Nashville, Tennessee, his love of music deepened as a teenager in Los Angeles, where he began his music studies with master teachers from Africa and Cuba.

Keenan performs the 21-string kora, a large calabash cut in half and covered with cow hide with strings traditionally made from thin strips of hide.

Tiffany Austin’s self-released Nothing But Soul made quite a splash, including sterling reviews in Downbeat and on NPR’s “Fresh Air” and is widely hailed as one of the best jazz debut albums of 2015. Her 2018 follow-up album, Unbroken, confirms the Bay Area vocalist’s status as one of jazz’s elite singers and a formidable songwriter as well.

Rather than separating African-American music into kindred tributaries, Austin plunges into the whole river of sound that’s sustained black life in America since before the nation’s founding. In many ways, she’s contesting what vocalist Gregory Porter has called “musical genocide” with a soul-steeped affirmation that embraces blues and swing, spirituals and R&B, bebop, post-bop, and her own Louisiana Creole heritage.

Hunter is a faculty member at East Bay Center for the Performing Arts, Shawl-Anderson, Youth in Arts and Dance-A-Vision. He is the founder of Iron Tri-Angel Urban Ballet in Richmond, was an instructor and rehearsal director for the Ross Dance Company, dance captain for Expedia.com commercials and was head Choreographer director for an Philippines's Musical "Amerikana-The Musical".