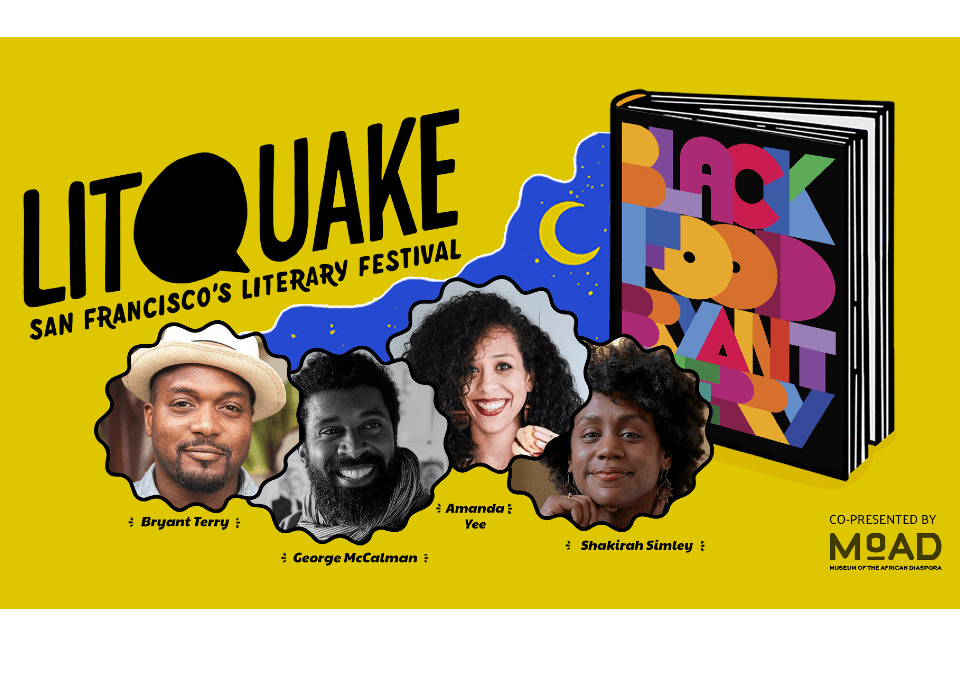 THIS EVENT IS SOLD OUT. THANK YOU. BOOKS ARE STILL AVAILABLE THROUGH OUR MoAD STORE, IN-PERSON OR ONLINE

‍Join MoAD and Litquake for a celebration of Bryant Terry’s groundbreaking new cookbook, Black Food: Stories, Art and Recipes from Across the African Diaspora, published by his newly Penguin Random House/Ten Speed Press-backed imprint 4 Color Books. Writer and organizer Shakirah Simley will facilitate a conversation between Terry, the book’s art director George McCalman, and the imprint’s creative director Amanda Yee, about the process of making Black Food as well as 4 Color’s plans to disrupt the publishing industry.

‍This program is in-person at MoAD. Proof of vaccination or a negative Covid-19 test within 72 hours of the start of the event is required at the door.

‍Black Food: Stories, Art and Recipes from Across the African Diaspora will be available for purchase on October 19th. You can pre-order it from our MoAD Online Bookstore

George McCalman is an artist and creative director. His studio, McCalman.Co, designs brands for a range of cultural clientele. Additionally, he’s a visual columnist for the San Francisco Chronicle, featured in “Observed” and “First Person.”

His first book, Illustrated Black History, will be published by Amistad/HarperCollins in 2022.

Shakirah Simley (moderator) is Executive Director at the Booker T. Washington Community Center. Shakirah received her undergraduate degree with honors from the University of Pennsylvania, and received her Master’s degree at the University Of Gastronomic Sciences (UNISG) in Italy via a Fulbright research scholarship.

Shakirah is recognized widely for her food work; she has been recognized as a change-maker by the Berkeley Food Institute, CUESA, Cherry Bombe, and Zagat. The daughter of a social worker, and granddaughter of a Black Panther, Shakirah was born and raised in Harlem, New York, and has lived in San Francisco for over 13 years.

Bryant Terry is an NAACP Image Award winner and a James Beard Award-winning chef and educator and the author of Afro-Vegan and Vegetable Kingdom. He is renowned for his activism and efforts to create a healthy, equitable, and sustainable food system.

His work has been featured in The New York Times and Washington Post, and on CBS This Morning and NPR’s All Things Considered. San Francisco Magazine included Bryant among the 11 Smartest People in the Bay Area Food Scene, and Fast Company named him one of 9 People Who Are Changing the Future of Food.

Amanda Yee is a Chinese, Norwegian, and African-American expatriate chef from Oakland, California, living in Berlin, Germany. Amanda has worked extensively in both critically acclaimed Californian and Danish restaurants while operating a community-based supper club called Five & Dime. She is currently the Creative Director for 4 Color Imprint.