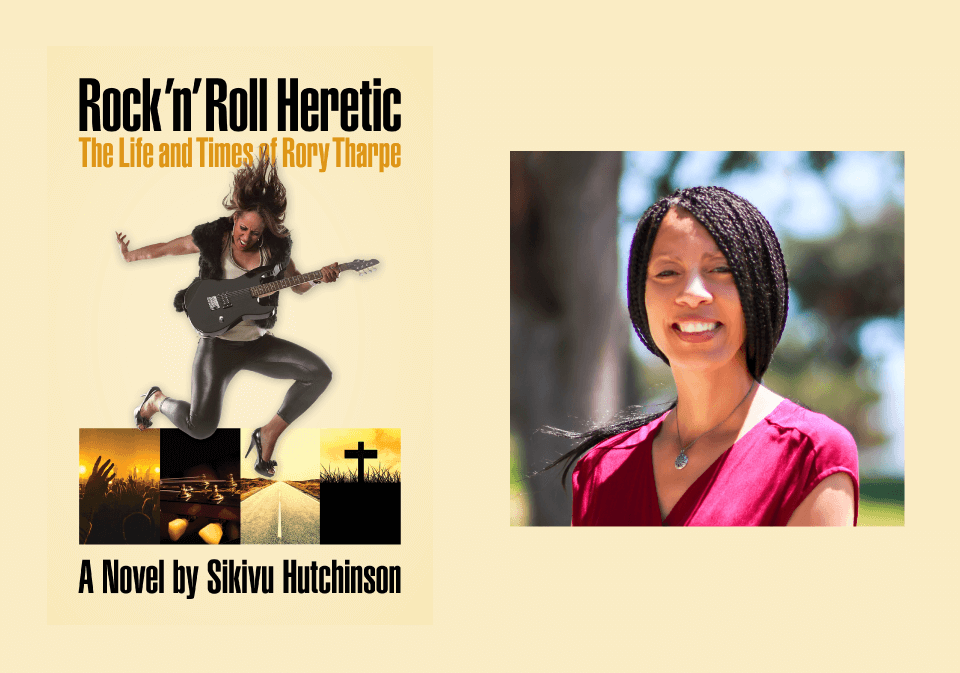 Join us for today's program on Zoom:

Join us for our Juneteenth Celebration!

‍You will receive instructions to join via zoom after you sign up here. Please check your spam or junk mail folder if you don’t see the email from MoAD in you inbox.

‍Copies of Rock ‘n’ Roll Heretic: The Life and Times of Rory Tharpe by Sikivu Hutchinson are available for purchase at the MoAD Online Bookstore.

Sikivu Hutchinson is a writer, educator, director and amateur guitarist. Her books and plays include Humanists in the Hood: Unapologetically Black, Feminist, and Heretical, White Nights, Black Paradise and the novel Rock ‘n’ Roll Heretic: The Life and Times of Rory Tharpe. She is the founder of the Women’s Leadership Project Black feminist mentoring and civic engagement program for girls of color in South L.A. and a co-facilitator of the Black LGBTQI+ Parent and Caregiver group

Samantha “GhettoSongBird” Hollins is an independent Rock-n-Roll singer-songwriter-guitarist from North Philadelphia. Since 2001 her cult fanbase has watched her blaze stages non-stop at legendary Rock venues including CBGB’s (NYC), The Bitter End (NYC), The Whisky A Go-Go (L.A.), The Troubadour (London), and The Overthrust Winter Mania Metal Fest in (Botswana) with hundreds of shows under her belt.

She was also the curator of her own festival, Wingdomfest; a show that gave space to Alternative artists of African descent and all genders. GhettoSongBird recorded her “Alley Of The Earth” EP in Los Angles (2002) with the help of her mentor Rosa Lee Brooks (a recording artist in the 60's, who wrote and recorded with Jimi Hendrix). The first single “landed" the Songbird on the classic B.E.T. show 106 & Park and in front of many music executives in a time that young Black women rocking with an aggressive electric guitar was taboo in the mainstream.

Gabriella “Guitar Gabby” Logan is an Atlanta Native and proud graduate of Spelman College and Vermont Law School. Her background in environmental and music law fueled her desire to start and manage the international touring collective, Guitar Gabby & The TxLips Band, LLC. Logan believes it is important for artists to be well-rounded and versed in many areas of the music business, thus inspiring women and Black musicians worldwide to be an unstoppable force.

She is currently a contributing writer for Guitar World Magazine, the Board Chair of Girls Rock Asheville, and Diversity Editor for Guitar Girl Magazine.

Zorrie Petrus is a 19-year-old photographer, filmmaker and musician (guitar, drums, keyboards and viola), who was born and raised in Los Angeles. She started out as a violist, dancer and overall lover of the arts, then photography and filmmaking came along soon after. She currently attends El Camino College, and has been a member of the Women’s Leadership Project since 10th grade.

Brianna Parnell is a budding guitarist and Women’s Leadership Project (WLP) alumni from Gardena High School, Class of 2019. She is also a first-generation student attending California State University of Sacramento, pursuing a BFA in Interior Design/Architecture. After undergrad, she aspires to attend Pratt Institute in New York, and pursue a graduate degree.

After college, she aspires to be an owner of multiple Black-owned businesses that will put wealth back into her community.

This event is supported in part by Poets & Writers.