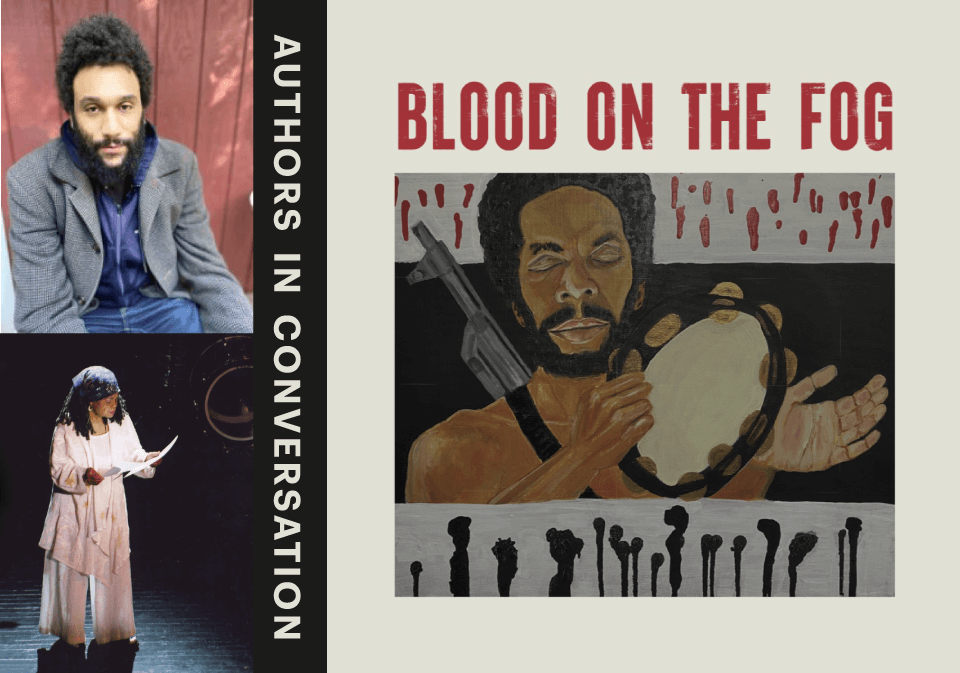 Join us on Zoom for today's program:

HERE IS YOUR LINK TO JOIN THE PROGRAM ON TUESDAY SEPTEMBER 21 at 6pm (PDT).

Join us for the launch of Blood on the Fog by San Francisco's Eighth Poet Laureate, Tongo Eisen-Martin, in conversation with poet, activist, and scholar Sonia Sanchez.

‍Politically astute, filled with wisdom and great humanity, this is poetry meant to conjure a healing and provoke a confrontation, an invitation to a journey through Black America.

‍A rhapsodic follow-up to Tongo Eisen-Martin's Heaven is All Goodbyes, this collection further explores themes of love and loss, family and faith, refracted through the lens of Black experience. These poems honor intellectual tradition and ancestral knowledge while blazing an entirely new path, recording and replaying the poet's sensory travels through America, from its packed metropolises to desolate anytowns. Radical, outraged, knowing, wry, and deeply humane, these are poems of survival that soar with a vision of collective liberation.

‍Blood on the Fog is available from the MoAD Bookstore.

‍Collected Poems by Sonia Sanchez is available from the MoAD Bookstore.

Praise for Blood on the Fog:

‍Continuing the lofty tradition of Langston Hughes, June Jordan, and Amiri Baraka, Tongo Eisen-Martin has emerged on center stage as today's premier revolutionary poet. A master craftsman and a sensitive artist, he reserves his sledgehammer words for the cruelty of imperialism. He should not only be read–he should be studied.–Gerald Horne

'Revolution' appears at least two dozen times in Tongo Eisen-Martin's amazing Blood on the Fog. Find something like a revolving, reiterating locomotion of music riding the rails of thinking and feeling in Blood on the Fog. Find a poetry of 'swinging type body language' where the swinging swings like Ellington and Ali combined, knocking you out inside and out, and turning you around in this extraordinary book.–Terrance Hayes

‍Blood on the Fog is the illest artifact of time travel I've ever experienced. Tongo Eisen-Martin takes us to a tomorrow and yesterday where we stand–contorted and mangled–but oh so beautiful, faithful and free.–Kiese Laymon

And they do the profound work of serving an eclipse of literary measure. Whether speaking rhyme in slant, calling forward Medgar Evers, or the spirituality of an oppressed people, Eisen-Martin offers stanza after stanza as a sunrise. Each poem leads us towards our liberation. This means these poems are heavy in their desire to free our current state of stoic apathy. This means Tongo Eisen-Martin's poetic legacy will live forever.–Mahogany L. Browne

Originally from San Francisco, Tongo Eisen-Martin is a poet, movement worker, and educator. His latest curriculum on extrajudicial killing of Black people, We Charge Genocide Again, has been used as an educational and organizing tool throughout the country. His book titled, "Someone's Dead Already" was nominated for a California Book Award.

In 2020, he co-founded Black Freighter Press. He is San Francisco’s eighth poet laureate.

Sonia Sanchez-award-winning poet, activist, scholar, and formerly the Laura Carnell professor of English and women's studies at Temple University-is the author of over twenty books, including Like the Singing Coming off the Drums, Does Your House Have Lions?, Wounded in the House of a Friend, and Shake Loose My Skin.

‍Sonia Sanchez has lectured at over 500 universities and colleges in the United States and has traveled extensively, reading her poetry in Africa, Cuba, England, the Caribbean, Australia, Europe, Nicaragua, the People’s Republic of China, Norway, and Canada.

In December of 2011, Philadelphia Mayor Michael Nutter selected Sonia Sanchez as Philadelphia’s first Poet Laureate, calling her “the longtime conscience of the city.”

This program is co-presented by City Lights Books.

Funding has been provided by California Humanities and the National Endowment for the Humanities (NEH)  as part of the American Rescue Plan Act of 2021.