Programs & Events
>
Conversations Across the Diaspora with Claudia Rankine 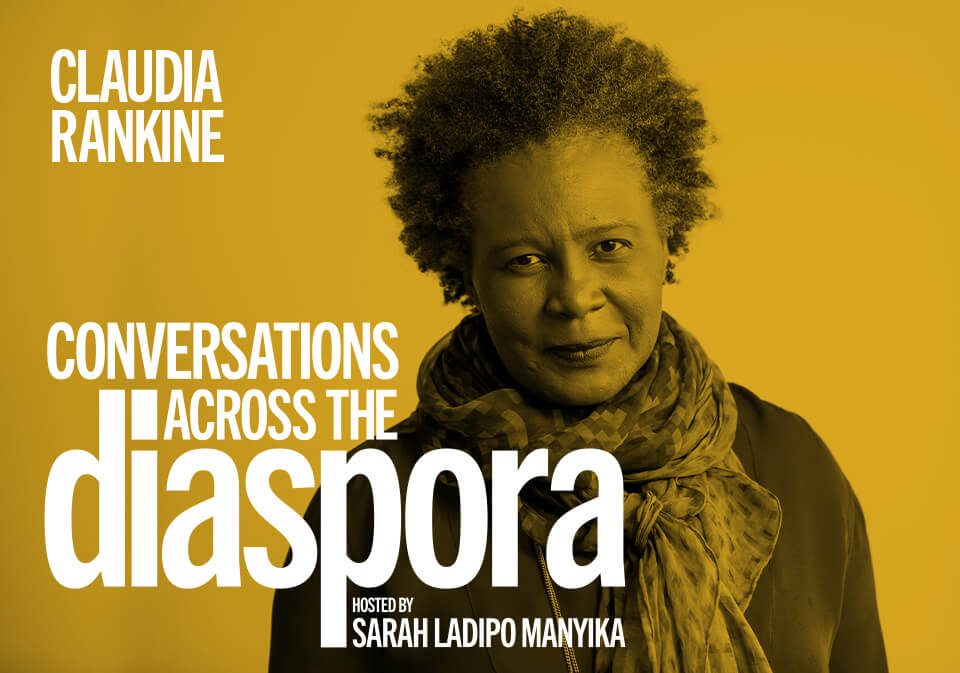 Join us for today's program! Here is the info to join via zoom:

Conversations Across the Diaspora, hosted by Sarah Ladipo Manyika

‍This month's Conversation's Acrss the Diaspora is co-presented with Litquake

A new interactive series brings you eclectic conversations from across the African diaspora. Join author and host Sarah Ladipo Manyika for talks with some of the most exciting voices from Berlin to Harare, from Tamale to London and New York and everywhere in between. We’ll introduce you to all sorts of folks—some you will know, others you may never have heard of, but never the usual suspects talking about the usual topics.

This month author and host Sarah Ladipo Manyika in conversation with poet, essayist and playwright Claudia Rankine. After you register you will receive information to join via zoom on November 13th at 12 noon (Pacific Daylight Time) / 8pm (UK).

‍Claudia Rankine is the author of five collections of poetry, including Citizen: An American Lyric and Don’t Let Me Be Lonely; two plays including The White Card, which premiered in February 2018 (ArtsEmerson/ American Repertory Theater) was published with Graywolf Press in 2019, and Provenance of Beauty: A South Bronx Travelogue; as well as numerous video collaborations. Her next publication, Just Us: An American Conversation, a collection of essays with Graywolf Press released in September 2020. She is also the editor of several anthologies including The Racial Imaginary: Writers on Race in the Life of the Mind.

In 2016, she co-founded The Racial Imaginary Institute (TRII). Among her numerous awards and honors, Rankine is the recipient of the Bobbitt National Prize for Poetry, the Poets & Writers’ Jackson Poetry Prize, and fellowships from the Guggenheim Foundation, the Lannan Foundation, the MacArthur Foundation, United States Artists, and the National Endowment of the Arts. She is a Chancellor of the Academy of American Poets and teaches at Yale University as the Frederick Iseman Professor of Poetry.

She lives in New Haven, Connecticut.

You can purchase Just Us: An American Conversation at the MoAD Online Store

‍Sarah Ladipo Manyika was raised in Nigeria and has lived in Kenya, France, Zimbabwe, and England. Sarah is a novelist, short story writer, and essayist and founding books editor for Ozy.com. Her debut novel, In Dependence, is an international bestseller while her second novel, Like a Mule Bringing Ice Cream to the Sun, has been translated into a number of languages. Her nonfiction includes personal essays and intimate profiles of people she meets from Mrs. Harris and Pastor Evan Mawarire to Toni Morrison, Margaret Busby and Michelle Obama.

Sarah previously served on MoAD’s board and currently serves as Board Director for the women’s writing residency, Hedgebrook.