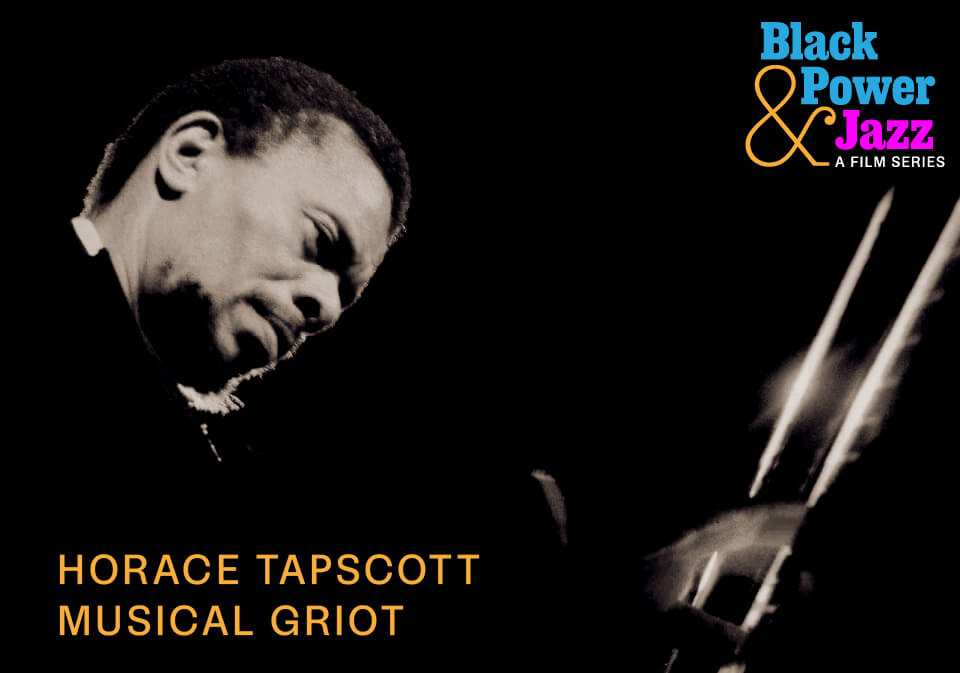 MoAD presents a four-week film series in conjunction with Black is Beautiful: The Photography of Kwame Brathwaite, a photographic exhibition focussing on how the Black Pride movement manifested in fashion and in jazz & soul music. Dr. Tanisha C. Ford writes in the catalogue, “Jazz set the rhythm for all of Brathwaites’s work… he is a son of the modern Jazz age.” The Black Power & Jazz film series complements the exhibition with works on representative and still influential icons of the era — from the widely celebrated performer Abbey Lincoln to the community-based California Jazz musician Horace Tapscott — as well as touching on the era’s “L.A. Rebellion” independent film movement.

HORACE TAPSCOTT MUSICAL GRIOT is a “poetic meditation on the strength of African American music and activism embodied in the history of Los Angeles through the life of musician, composer and community activist, Horace Tapscott (1934-1999)”.  During the Watts Rebellion of 1965, LAPD stopped his performances, stating that his music incited people to riot.  He was blacklisted in the 1960’s and 70’s because of his affiliation with political groups active during those times.

The film allows Mr. Tapscott to reveal his story as a griot would in a West African society who preserves the knowledge, legacy and oral history of his culture.  Filmmaker Barbara McCullough will introduce the film and lead a post-screening discussion.

A native of New Orleans, Barbara McCullough spent most of her life in the Los Angeles area.  She attended UCLA and was part of a group of filmmakers who were termed, “The LA Rebellion”. Her goal is to reveal untold stories reflective of African American life. Other film and video projects include: “Water Ritual #1: An Urban Rite of Purification”, “Shopping Bag Spirits and Freeway Fetishes: Reflection on Ritual Space”, “Fragments”, and “The World Saxophone Quartet”.

These projects have been screened in galleries and museums nationally and internationally. Her film, “HORACE TAPSCOTT: MUSICAL GRIOT” is a documentary on musical genius, community activist and mentor to generations of accomplished jazz musicians, the late Horace Tapscott. Through his story, the history of jazz in Los Angeles is told.

Ms. McCullough worked in the special visual effects industry for over 20 years and was past chair of the visual effects department at Savannah College of Art and Design.

Find our Curated Bookstore Selections based on Black Power & Jazz in the MoAD Store!

This project was made possible with support from California Humanities, a non- profit partner of the National Endowment for the Humanities. Visit www.calhum.org.